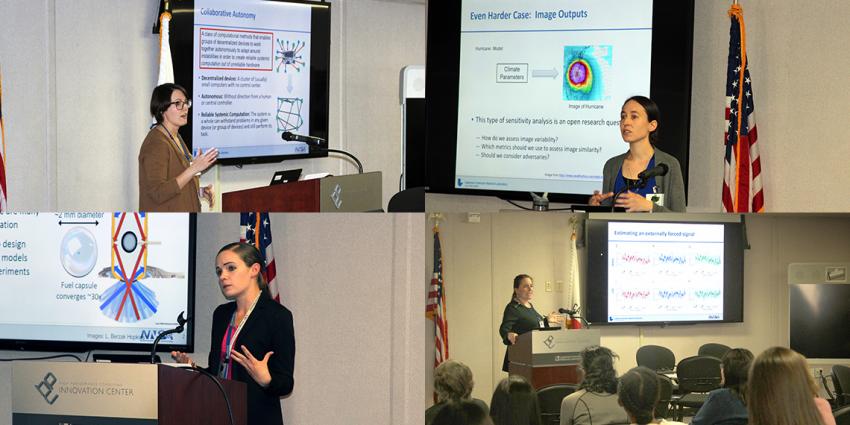 Livermore was one of over 200 regional events in 60 countries coordinated with the main WiDS conference at Stanford University. According to the WiDS website, the distributed conference began in 2015 to celebrate data science research while supporting women in the field. The day’s agenda included local speakers, a career panel, mentoring sessions, and a networking reception interspersed with highlights from the Stanford livestream.

WiDS Livermore featured four technical talks by LLNL women. Computational mathematician Alyson Fox described the Global Security Directorate’s work in collaborative autonomy, in which a network of devices shares information and tasks. She stated, “This networking is common in nature, such as in a flock of birds.”

Fox summarized her work in the Skynet project to strengthen the resiliency and robustness of calculations—applying resiliency techniques for a decentralized average to iterative linear solvers—that determine how the network of devices will converge to a solution, even if an individual device or a link between networked devices fails. “It’s an exciting time to work on collaborative autonomy,” Fox said. “The capabilities are where machine learning was 10 years ago. These algorithms will become more important as our world continues to become even more digitized.”

Applied statistician Katie Schmidt discussed sensitivity analysis, which helps determine the influential parameters in a mathematical model. “Changing a parameter affects the model’s output. A bigger change in the output indicates a more sensitive parameter,” she explained. Analyzing sensitivity is especially important for models with large parameter sets. If only the most sensitive model parameters are estimated, the dimension of the problem is reduced, saving time and computational expense.

Schmidt demonstrated how to apply two sensitivity methods to real-world examples of disease and stress-strain model predictions, stating, “We can examine sensitivity locally, where a model is perturbed around a nominal value, as well as globally around the entire parameter space.”

According to Schmidt, the field of sensitivity analysis holds great promise for uncertainty quantification research because of the potential for creativity. She added, “New, complex models are emerging to handle a wide variety of data modalities. While sensitivity analysis is well-established for models with scalar inputs and outputs, there is room for ingenuity in dealing with other model types. For example, no existing sensitivity analysis methods can handle classification models, such as the canonical cat/dog supervised learning problem, or climate models that output a predicted image of a hurricane.”

The third talk was on training machine learning models to predict the performance of inertial confinement fusion (ICF) experiments using a technique called transfer learning. Design physicist Kelli Humbird explained that the design loop benefits from machine learning by explicitly updating models with integrated experimental and simulation data. She stated, “We applied the technique of transfer learning, where a neural network learns to solve a different but related task, to calibrate an ICF model to experimental data, creating a model that is more predictive of experiments than simulations alone.”

Using data from the University of Rochester’s Omega Laser Facility, Humbird showed that transfer learning predicted the outcome of ICF experiments with high accuracy, providing insights into more productive fuel capsule designs. This work is being extended to apply to indirect drive ICF experiments carried out at LLNL’s National Ignition Facility. With these data-driven techniques in hand, researchers hope to accelerate optimization of ICF design to produce high yields at NIF.

Rounding out the day’s technical agenda, statistician Giuliana Pallotta summarized a variability analysis of tropospheric temperature data in simulated and observed time series. “Recent published papers have raised the possibility that climate models from the fifth phase of the Coupled Model Intercomparison Project, or CMIP5, are underestimating the low-frequency variability of the observational data,” she explained. CMIP5 provides a standard framework for coordinated climate science simulations.

Pallotta analyzed power spectral densities from satellite datasets and CMIP5 simulations, then compared several statistical models of the observed climate internal variability with long- and short-range memory features to determine the probability that the model simulations have larger band power than the observational data. She noted, “The research found that most CMIP5 climate models do not, on average, underestimate the observed low-frequency variability.” Pallotta’s work will be published this year.

Marisa Torres, bioinformatics group leader in Computing and co-organizer of WiDS Livermore, noted, “Our first year hosting WiDS Livermore mostly included people I was familiar with. Now, with a bigger audience across more topics, it feels like attendees are having an easier time connecting with others in the community doing research they’re interested in.”