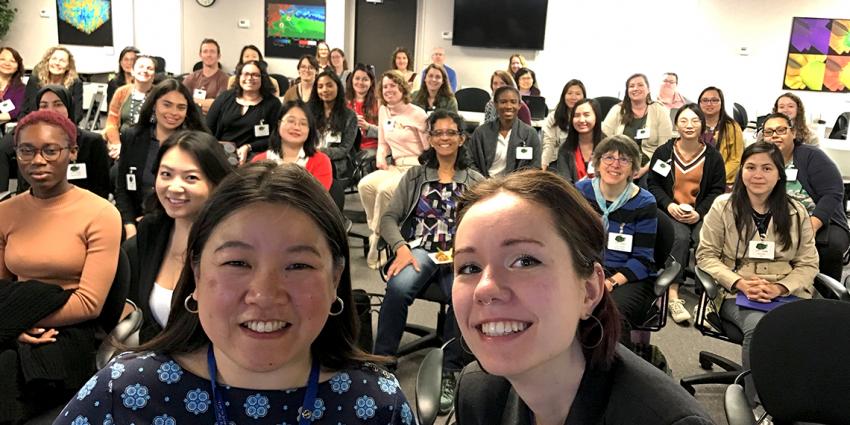 Livermore was one of over 200 regional events in 60 countries coordinated with the main WiDS conference at Stanford University. According to the WiDS website, the distributed conference began in 2015 to celebrate data science research while supporting women in the field.

Among 500 worldwide WiDS ambassadors are LLNL bioinformatics group leader Marisa Torres and bioinformatics software engineer Masha Aseeva. The two organized the Livermore event. Torres stated, “Hosting a regional event allows people to attend without having to travel all the way to Stanford.” The day’s agenda featured local speakers, a career panel, mentoring sessions, and a networking reception interspersed with highlights from the Stanford livestream.

Outreach to the Next Generation

Marisol Gamboa gave the opening address, focusing on LLNL’s outreach efforts through three internship programs. For example, the Data Science Summer Institute, which Gamboa co-directs, saw 1,800 applicants competing for just 32 spots in the 2019 summer session. The 12-week program will welcome its fourth class this May.

The two-week Data Science Challenge invites students from the University of California (UC), Merced, to explore data science, encouraging them to pursue graduate education and consider LLNL as a potential employer. “UC Merced has a high population of underrepresented students. As a first-generation Mexican American, it’s important to me to help level the playing field,” Gamboa said.

Gamboa noted, “These internship programs expose students to real-world data sets and mission-relevant problems. And young women are starting to make up a larger percentage of participants in all of them.”

Torres noted, “Our first year hosting WiDS Livermore mostly included people I was familiar with. Now, with a bigger audience across more topics, it feels like attendees are having an easier time connecting with others in the community doing research they’re interested in.”

The speed mentoring session gave mentees a chance to ask a mentor questions for 10 minutes before rotating to the next mentor. Among the nearly 40 mentoring participants were Maureen Wan, a decision analyst at Chevron, and Majerle Reeves, a PhD candidate from UC Merced.

Wan attended WIDS Livermore to learn more about machine learning and related emerging fields. At Chevron, she helps project teams clarify decisions by providing qualitative framing and economic analysis. “I’ve learned so much as a mentee over the years, so I welcomed the opportunity to give back as a WiDS mentor, especially to the college women just starting their careers,” Wan stated.

Reeves traveled the 90 miles to Livermore with three fellow graduate students and appreciated being able to hear from women who have been in her shoes. “I attended WiDS because I work in data science and machine learning, I am a strong believer in uplifting the work and research of women,” she said. WiDS Livermore welcomed 16 students from UC Merced and University of the Pacific (Stockton, CA).

Computer scientist Stephanie Brink, who organized the session, said, “Speed mentoring is a wonderful component to the WiDS event. Mentors inspire others by sharing their experiences. And on the flip side, mentees meet new people they can reach out to about academic and professional situations. It’s very important to build these mentoring relationships as they move forward.”

Aseeva moderated a career panel that included data scientist Cindy Gonzales and applied statistician Amanda Muyskens, both from LLNL, along with Brynn Claypoole, a software engineer from 10xGenomics. Aseeva said, “The panelists explained their experiences starting out in the field, including insecurities and challenges they faced. Their advice is important to succeeding in data science.”

A key topic of discussion was how to build a technical career while experiencing imposter syndrome. Gonzales, who transitioned to a data science career via the Data Science Institute’s immersion program, described the challenge of overcoming an unproductive mindset. “We are our own biggest critics,” she said. “Trust yourself. You know a lot more than you give yourself credit for.”

The panelists also talked about both technical and soft skills valuable in building a career. Claypoole emphasized a willingness to learn and having patience. “Learn on the job, even if someone doesn’t direct you in what to do,” she stated. “Patience is important when you’re coding or analyzing data. There will always be frustrations, and you’ll get through them.”

For women trying to enter the data science field, Muyskens recommended interning. “Internships will teach you what you like and don’t like, and you’ll make lasting connections,” she advised, recounting her experience with an actuary firm. “People told me I’d like being an actuary because I was a statistics major, but it was not a good fit.”

The next WiDS Livermore event will take place in March 2021. Until then, Torres noted, supportive attitudes and environments should be encouraged every day. Aseeva agreed, “Often, a woman with a technology career is the only woman in a room full of men, which can feel isolating. This event opens up the LLNL community to a broad network of women in data science so that we can support each other.”

According to organizers, approximately half of WiDS Livermore attendees came from outside LLNL. The event was sponsored by LLNL’s Office of Strategic Diversity and Inclusion Programs with support from the Computing Directorate and the Data Science Institute.