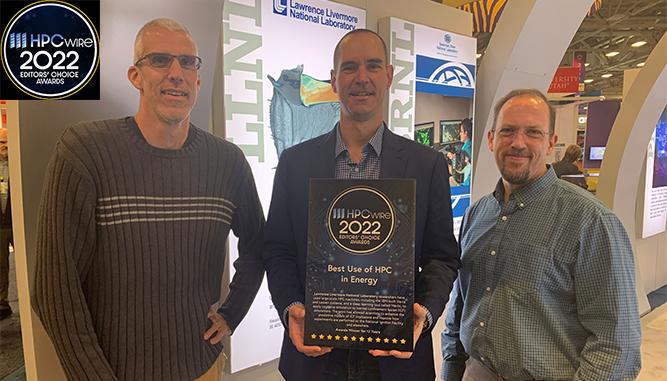 The high performance computing publication HPCwire announced LLNL as the winner of its Editor’s Choice award for Best Use of HPC in Energy for applying cognitive simulation (CogSim) methods to inertial confinement fusion (ICF) research. The award was presented at the largest supercomputing conference in the world: the 2022 International Conference for High Performance Computing, Networking, Storage, and Analysis (SC22) in Dallas. The award recognizes the team for progress in their ML-based approach to modeling ICF experiments performed at the National Ignition Facility and elsewhere, which has led to the creation of faster and more accurate models of ICF implosions. Emerging at LLNL over the past several years, the CogSim technique uses the Lab’s cutting-edge HPC machines to combine deep neural networks with the massive databases of historical ICF experiments to calibrate the models. Applying CogSim to ICF research has resulted in faster, better-performing models that can predict experimental outcome with higher accuracy than simulations alone and with fewer experiments, according to researchers. Read more at LLNL News.