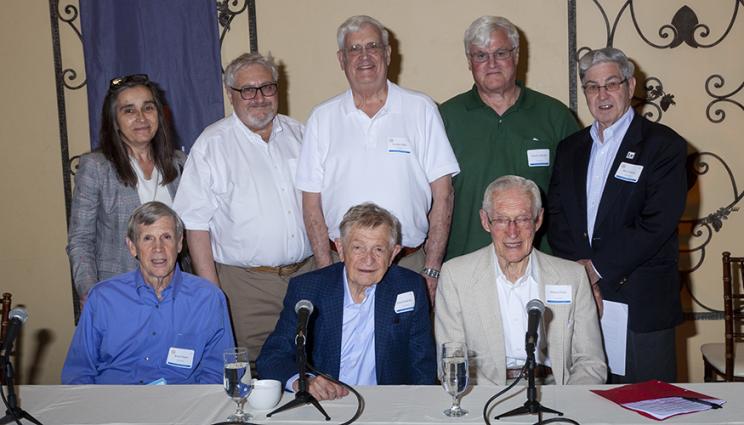 All nine living Lab directors including John Foster Jr. (seated right) and John Nuckolls (seated left) gathered for a historic panel discussion on Sept. 8 to celebrate the Laboratory’s upcoming 70th anniversary, share stories and discuss their vision for the Laboratory in the coming years.

On a historic occasion in the Livermore wine country, the nine living LLNL directors gathered on Sept. 8 to mark the Laboratory’s 70th anniversary, share stories and discuss their vision for the Lab in the coming years. Hosted by the nonprofit Livermore Lab Foundation, the panel brought past directors John Foster Jr., John Nuckolls, Bruce Tarter, George Miller, Parney Albright, and Bill Goldstein together with current director Kim Budil at one table, altogether spanning nearly seven decades of LLNL leadership. Two other previous directors—Michael May and Michael Anastasio—participated in the discussion via prerecorded talks. More than 200 people were on hand for the event, including many current and retired LLNL employees, dignitaries and local elected officials. Among the guests of honor was Department of Energy Under Secretary of Nuclear Security and Administrator for the National Nuclear Security Administration Jill Hruby, who opened the event by stressing the importance of preserving the Lab’s legacy as a site for “big ideas.” Read more at LLNL News.