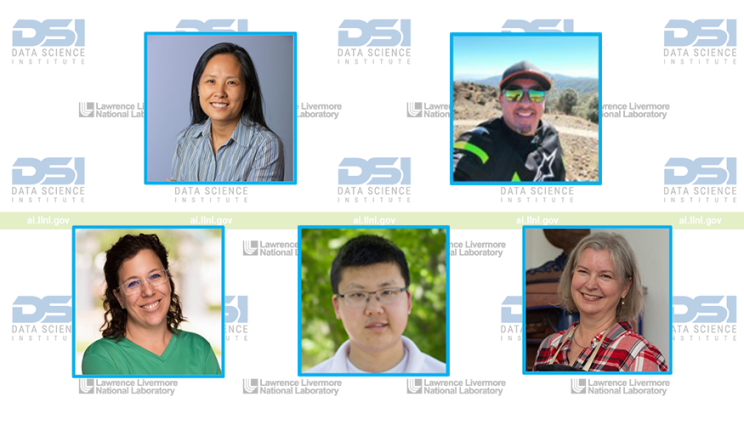 Clockwise from top left: Anh Quach (moderator), Raul Viera Mercado, Christine Hartmann, Kevin Chen, and Terri Stearman discussed the importance of diversity, equity, and inclusion in the workplace as well as opportunities they have found by joining the Lab’s Employee Resource Groups.

The DSI’s career panel series continued on November 3 with a session highlighting diversity, equity, and inclusion (DEI) as well as the Lab’s DEI-focused employee resource groups (ERGs). ERGs are sponsored by LLNL’s Office of Strategic Diversity and Inclusion Programs.

The panelists agreed that joining ERG communities can be very rewarding and open many doors. A native Puerto Rican, Viera Mercado wanted to meet other Hispanics when he began a Lab internship in 2012. AUHIP has connected him with Spanish speakers. He said, “I wanted to be part of a community with similar interests, and learn about opportunities where I can help others like my mentors have helped me.” Viera Mercado now serves as a group leader in Computing’s Global Security Computing Applications Division (GS-CAD)—a promotion he attributes in part to his experience on the AUHIP leadership team.

Stearman joined LLLWA “almost by accident” after attending an inspiring presentation in 2018. She stated, “The networking opportunity that comes from ERG membership is huge. I’ve been invited to speak all over the Lab and have met so many people, including those outside my area of expertise. It’s the single best thing I’ve done for my career.”

Chen, who won an LLNL Director’s Diversity & Inclusion Award in 2019, explained that involvement in Abilities Champions gave him the confidence to mentor a student during the past year. “It’s rewarding to realize that I can have an impact on someone’s career trajectory,” he said.

ERGs work closely with Lab management to promote DEI initiatives. For example, LLLWA worked to streamline the employee name-change process, which affects human resources paperwork, email addresses, and various databases storing employee information. Stearman explained, “The old process was a longstanding pain point for those changing their name for marriage or other reasons. The new process rolled out just a few weeks ago.”

Viera Mercado recently led a pilot program in GS-CAD to incorporate ERGs and other employee services into job interviews, giving candidates an early opportunity to learn about the Lab’s DEI resources. “We hope this will become part of the interviewing process all over the Lab,” he said.

Chen noted that the Abilities Champions group has advocated for workplace accommodations—such as dimmed lighting, noise-canceling headphones, and limited in-person meetings—that reduce sensory overload and cognitive burden on neurodiverse staff. He stated, “These accommodations allow employees to focus on their work more comfortably and contribute more effectively to their projects.”

APAC has hosted training courses in leadership, communications, assertiveness, and career planning. “As a baby refugee and first-generation college student, growing up with certain cultural norms can make it difficult for introverts like me to transition into leadership positions,” Quach explained. “These resources helped me adapt my communication style to the audience.”

More generally, a person’s attitude toward others can nurture inclusiveness in the workplace. Hartmann suggested, “Instead of making judgments about what another person should be doing, I try to consider their motivation—to emphasize why more than what.”

ERGs are open to all Lab employees and supplemental labor staff. Quach stated, “I highly encourage everyone to join and participate in ERG events. I didn’t know about Juneteenth until I attended the ABLE [African American Body of Laboratory Employees] celebration.”

In addition to co-founding Abilities Champions, Hartmann belongs to the American Indian Activity Group (AIAG) even though she is not of Native American descent. She urged the audience to learn from the Lab’s diverse population, pointing out, “We should take advantage of, and celebrate, that we’re privileged to work with many different kinds of people.”

Most ERGs have been meeting remotely during the pandemic, and these representatives look forward to attending occasional in-person or hybrid events under appropriate safety precautions. Visit the Lab’s Employee Engagement web page to learn more about ERGs and other DEI initiatives that contribute to Lab culture.